At the same time, Alabama consumers purchase $11 billion of food each year, including $6.5 billion to eat at home, of which $1.1 billion is spent on fruits and vegetables.  Over 90% of this money is spent on food grown outside the state. 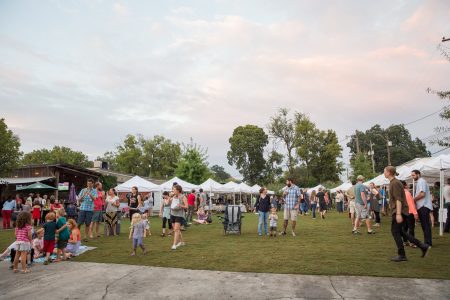 In other words, on both the production and consumption side of Alabama’s food supply chain, we are exporting far more wealth than we are building or retaining within the state.  This can change.  If Alabamians purchased 15% of their food for home use directly from Alabama farmers, farmers would bring in an additional $980 million in income annually.  Meanwhile, sustainable and organic approaches to agriculture require far fewer inputs than conventional agriculture, lowering the cost of production and effectively increasing the wealth retained with the producer (and within the state).

The same sieve-like effect that takes place economically, also takes place agriculturally.  When agricultural systems focus on maximizing production instead of optimizing the overall health of the soil, we see a reduction of soil organic matter, which in turn reduces the soil’s ability to retain vital nutrients.  As a result, conventional farmers must “import” ever-increasing amounts of replacement nutrients… all while an ever-increasing percentage of those “imports” run straight through the soil without being absorbed, and run-off to eventually pollute waterways and downstream ecosystems.[3],[4]

One of the primary aims of sustainable agriculture is to avoid these downward spirals and instead seek to create closed or self-feeding loops.

When the focus is on the health and resiliency of the overall system, the system can actually run better and “run on less” because it uses, retains, and reuses the resources it has available.  Focusing on health instead of output, changes the fundamental way we view agriculture and our role in it.  As farmer and author Wendell Berry writes, “We apply the word “health” only to living creatures, and […] a healthy soil is a wilderness, mostly unstudied and unknown, but seemingly alive. The soil is at once a living community of creatures and their habitat.”  The farm’s crops, animals, and farmers, he says, “all are members of the soil community; all belong to the character and identity of the place. To rate the farm family merely as “labor” and its domestic plants and animals merely as “production” is thus an oversimplification, both radical and destructive.”

To cultivate a healthy soil, a web of healthy soil relationships, we must cultivate a deep familiarity with the personalities, preferences, and needs of all the members of the soil community.  We must embrace complexity and inconvenience and interdependence.  We must be humble enough to see ourselves as part of the soil community, not master of it.

These same things hold true for cultivating healthy human communities.  When we focus on cultivating a deep and wide network of healthy relationships with the people with whom we live in community, we cultivate more elegant, cyclical, and self-strengthening ways of reinvesting in ourselves and banking up resilience and collective prosperity.

This sort of community-building is ASAN’s goal year-round, but as we move into the fall we would like to highlight two noteworthy opportunities.

Our farm-to-fork picnic Graze: Birmingham is coming up on September 9, and is meant to bring consumers closer to area farmers and local chefs who raise and prepare amazing food.  Graze is a family-friendly shindig with live music and grass to spread out on while you enjoy good food and drink and the warm vibes of community.  Learn more and buy tickets on the Graze page. 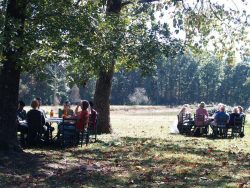 Secondly, our December Food & Farm Forum, accompanied this year by our first-ever Youth Food & Farm Forum, seeks to create a platform for peer-to-peer sharing and relationship-building as well.  The Forum and Youth Forum are a conference, a space for learning hard skills about food production, sustainable living, food systems, and more… but they’re also a celebration of the end of the year and the growing season, and a reunion of friends old and new.  This year’s event will be December 7-8 at Camp McDowell, about an hour northwest of Birmingham.

“Soil science,” as practiced by soil scientists, and even more as it has been handed down to farmers, has tended to treat the soil as a lifeless matrix in which “soil chemistry” takes place and “nutrients” are “made available.” And this, in turn, has made farming increasingly shallow — literally so — in its understanding of the soil. The modern farm is understood as a surface on which various mechanical operations are performed, and to which various chemicals are applied. The undersurface reality of organisms and roots is mostly ignored.

Sustainable or regenerative agriculture on the other hand is successful when the farm – above and below the soil level – is teeming with abundant, diverse, and interdependent life forms.  The micorrhizal fungi life on plant root systems and draw nutrients and water from much farther than the roots themselves extend.  Dung beetles break apart manure pads, distributing it laterally and digging down and burying it into the soil, aerating it and recovering lost nitrogen that then does not need to be added synthetically.

When we are intimately familiar with the people and communities around us – and each of their unique skill sets, needs, and backgrounds – and when we open ourselves up to be changed by our experience of being part of community, the result is empowering and enriching.