Finding a Voice: Hearing the Unheard

As a senior in natural resources management, people keep asking me, “Mary Jo, why this trip? How does living in New Zealand or Fiji help you in the long run?” Well nosy neighbor, this trip is called Sustainability in Action so that is pretty pertinent to natural resources. And it may be about tourism, but there is a lot more to tourism than hanging out and having fun.

People like that tend to forget that humans are a major influence on our natural resources. We decide how to use what we have. We choose what gets protected and what doesn’t. Our decisions can have a major impact—positive or negative. This trip was the chance of a lifetime to find out how other people view the world.

As much as we focused on the role nature plays, I found myself more drawn to the role played by the indigenous people. There is an all too common theme of an area being settled by a group for hundreds—if not thousands—of years only to be nearly wiped out by colonizers. New Zealand is much the same. The Maori People were the first to the island; yet, they are not the most dominant culture. When New Zealand was colonized, the Maori were killed and pushed aside; their language was outlawed and almost lost forever.

Sound familiar? The same thing has happened again and again in many locations. The First Nations people in America were treated the same. Unlike America, New Zealand is making an effort to allow the Maori the place in history they deserve. Each tour we attended, each attraction we visited had either Maori language or how the Maori interacted with what we were learning about. National landmarks are being given back the Maori names. Mt. Cook is no longer just Mt. Cook, but now it is Aoraki Mt. Cook. Aoraki being the Maori name which means “cloud piercer” for the way the mountain’s height extends above cloud level.

As wonderful as it was to see the attention given to the Maori, we hardly had any interaction with the Maori directly. We attended a traditional Maori dinner one night in Christchurch during which we watched as Maori people danced the haka and showed us many of the tools and rituals performed by their ancestors. It was truly amazing to behold, but at the same time we were just spectators watching people perform. We never got to talk with the Maori to see what it is like living in New Zealand or even ask if they wanted to perform for us. It felt very superficial. 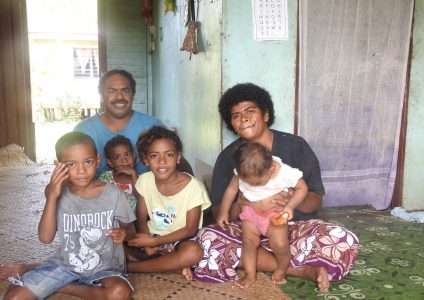 Fortunately, we had a much deeper cultural experience in Fiji. We stayed on VoroVoro, a twenty-acre island in the South Pacific. VoroVoro is a cultural center designed to give people the opportunity to discover the rich history of Fiji. We lived in primitive style vales meant to emulate the past. We participated in traditional ceremonies and got a taste of what life is like for a Fijian.

This trip taught me how to listen to the people around me and see what life is like for those in different circumstances. I learned that I have a certain amount of privilege that was given to me for no reason. I cannot speak for the Maori people or people from Fiji. My voice is not the one that needs to be heard, but I can listen. I can talk with those who are being oppressed or cast aside.

Even in Auburn, I can make a difference. I can find those who have something to say that are not being listened to, and I can make sure that they are heard. Everyone has a voice. It is time we start listening. No one deserves to go unheard.