Director’s Corner: Earth Day and the Power of Citizens to Create Change 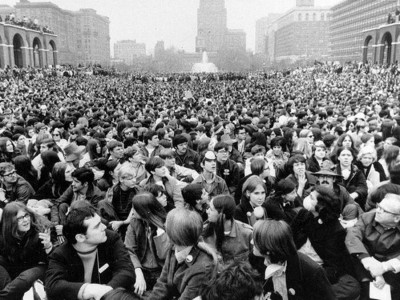 A rally in Philadelphia during the first Earth Day celebration. Photo Credit: AP

“Never in my long lifetime have I ever seen such an aroused populace at the grassroots level. This oil pollution has done something I have never seen before in Santa Barbara – it has united citizens of all political persuasions in a truly nonpartisan cause.” – Santa Barbara NewsPress Editor Thomas Storke, February 1969

“There are no scientific or technical obstacles to protecting our world and the precious life it supports.  It all depends on what we truly value, and that we can summon the will to act.” – Neil deGrasse Tyson

Earth Day 2015 is April 22, the 45th Anniversary of the original Earth Day in 1970, a massive nationwide event that was the largest public demonstration in American history.  20 million people across the nation participated in teach-ins, demonstrations, festivals, and marches.

The first Earth Day resulted from outrage over uncontrolled pollution that fouled the land, air, and water.  There were other roiling social issues during this time: the women’s movement, civil rights, and growing anti-Vietnam War sentiment combined with a nascent environmental movement to engage large and diverse numbers of Americans in efforts to create societal change.

In the midst of social upheaval and extensive citizen engagement, and because of it, significant change did occur.  The Vietnam War ended and landmark civil rights and environmental legislation became law at the federal level that changed society for the better.

The 1960s were years of citizen activism.  As the 1970s evolved citizens stepped aside and let professional environmental and other non-governmental organizations and governmental agencies at the local, state, and federal level take the lead on implementing and enforcing laws designed to improve environmental and social conditions.  Policy seemed to do enough and be enough.  Citizens took a back seat to the legal and technical expertise required to craft, understand, apply, and enforce complex laws and regulations.   Citizens to a significant degree lost their civic muscle and relied on others to get the job done, figuring that laws had been passed, and victory secured.

But our work as citizens is not done.  Far from it.  Our work as engaged citizens is never done.  Not if we hope to nurture a living democracy, a society that reflects our interests, priorities, and values as citizens.

In the 1980s President Kennedy’s “Ask not what your country can do for you, ask what you can do for your country” morphed into President Reagan’s “Government isn’t the solution, it’s the problem.”  Kennedy’s call for citizens to work together and with government on behalf of the common good no longer held sway and Reagan’s message of self-reliance, and distrust, even fear, of government had significant and lasting impact.

Anyone who has taken Civics 101 learns it is typical for governmental agencies with oversight responsibilities to lose their way as stewards of the public interest and become captured by the industries they are mandated to regulate and monitor.  This can happen under the best of circumstances, and is especially likely when presidents install industry insiders as leaders of government agencies.  The protections we think are in place aren’t even close to reality.

The 2010 BP oil disaster in the Gulf of Mexico is a case in point. The federal Minerals Management Service (MMS) utterly failed to fulfill its responsibility of oversight for this project.  Had MMS done its job protecting the public interest it is highly likely that the largest oil spill in American history – 210 million gallons of crude plus 1.8 million gallons of the toxic dispersant Corexit – never would have happened.  And then there is the loss of lives and livelihoods that would have been prevented.

Contrary to the will and welfare of the public, political pressures have increasingly been brought to bear on oversight agencies to back off enforcement of legal requirements under the law (I have seen this many times in my career).  In Congress efforts are underway to gut federal clean air and water protections at a time when they need to be strengthened and improved, and sell off public lands belonging to all Americans.  Florida Governor Rick Scott has banned agency employees from using the terms “climate change” and “global warming” in official communications.  State legislatures in Indiana and Arkansas have just passed bills that in effect legalize discrimination under the guise of religious freedom.  Indiana’s Governor Pence signed that legislation into law.

Interestingly, as I write this, both Indiana and Arkansas are backing away from the legislative language they at first defended with vigor.  And why?  Because numerous citizens, civic organizations, and businesses are demanding change at the threat of lost business now and the possibility of lost elections in the near future.  Which illustrates the main point of this column: organized citizen activism is essential, effective, and is the only thing that can trump big money and entrenched interests.  The need for vigilance and engagement is never ending.

As famed environmentalist David Brower observed, battles to protect land, air, water, biodiversity, wilderness, civil rights, and human wellbeing, are battles that can never be won forever. Victories are never permanent. But they are battles that can be lost forever.   Once an old growth forest is cut it is gone forever.  A victory may protect a forest today, but tomorrow a new effort will be underway to exploit it for near-term profit.  The Voting Rights Act of 1965 was a powerful weapon to enfranchise Americans.  Now it has been weakened and voter suppression is on the rise.  Historic and current events have proven Brower right.

One important factor that has led to the decrease in citizen activism is that people get tired of fighting, tired of confronting and resisting threats and constant attacks on things like clean air and water, and safe, fair working conditions, things that Americans have consistently valued for decades.  And people have come to the conclusion that their efforts won’t matter.  When our energy goes mostly into stopping bad things from happening – pollution, discrimination, poverty, injustice – it is easy to get worn out.  It is tough to dwell in a deficit mindset.

What a difference it would make if people were energized by a powerful, positive vision of what we want, of what the world would be like if we made the effort to create it.  Unfortunately, inspiring visions that serve as a call to action are few and far between.  The environmental movement has long been criticized for this failure, and the broader sustainability movement is also lacking strong visions of what is possible when we engage together to describe and then create something new and better.

In a 2005 critique of the environmental movement called The Death of Environmentalism, authors Michael Shellenberger and Ted Nordaus point out the failure of professional environmental organizations to offer a compelling vision of what is possible.  They cite Rev. Martin Luther King’s powerful “I Have a Dream” speech as an exception.

In their subsequent book, Break Through, they tell the story of that speech, given at the Lincoln Memorial in 1963.  I just finished reading and watching it again.  The first part of the speech is an indictment of an America that tolerated nightmarish brutality toward some of its own citizens, a society of hatred, prejudice, injustice, and segregation, an America failing to live up to its commitments in the Declaration of Independence and the Constitution.

This was his planned speech.  It confronted brutal facts. There was nothing in his prepared remarks about a dream.  Had it ended there the speech would no doubt be remembered for its truth-telling, moral power, and demand for justice.  But it would have stopped with conditions as they existed in 1963.  There would be no energizing and compelling vision of something noble and better that might pull us forward.

Sitting behind him that day was singer Mahalia Jackson who called out “Tell them about your dream, Martin!” Again: “Martin, tell them about the dream!”  If you watch the speech you will not hear Ms. Jackson’s call, but you can see the moment when it occurs.

Dr. King dramatically shifts the tone of his remarks.  He says: “Let us not wallow in the valley of despair, I say to you today, my friends.  And so even though we face the difficulties of today and tomorrow, I still have a dream. It is a dream deeply rooted in the American dream.  I have a dream that one day this nation will rise up and live out the true meaning of its creed: ‘We hold these truths to be self-evident, that all men are created equal.’ ….”  He goes on to complete one of the greatest speeches in American history.

The other great speech that sticks in my mind is the Gettysburg Address by President Lincoln, given 100 years before Dr. King’s speech, in 1863.  It too contains aspiration, hope, and the call for effort on behalf of a “great task,” a noble cause that is of utmost relevance and importance today: “It is rather for us to be here dedicated to the great task remaining before us — that from these honored dead we take increased devotion to that cause for which they gave the last full measure of devotion — that we here highly resolve that these dead shall not have died in vain — that this nation, under God, shall have a new birth of freedom — and that government of the people, by the people, for the people, shall not perish from the earth.”

I frankly worry that “government of the people, by the people, for the people” is in danger.  Big money, big power, big influence rules the day.  I don’t think American values or priorities have changed.  The things that caused so much unrest in the 1960s still matter today: a clean environment, safe food and water, fairness, social justice, equal rights, education, and decent-paying jobs.  In Ray Anderson’s words “a better quality of life for everyone” should be the goal of our economy and society.  But what we the people want is ignored.

What can turn the tide?  What will spark citizen engagement now in 2015 that could ultimately raise the public interest to the top of government’s agenda?

While we need good laws, rules, and enforcement mechanisms to require minimum standards of behavior, regulations have always been better at preventing the worst, and not so great at promoting the best.

We need a different conversation, one that speaks to the best in us and leads our energies to possibility.  Possibility that draws citizens and communities into conversation to describe the future we want and then into action to make the changes needed to get us there.

Here are some words beckoning us in that direction:

From economist Robert Costanza: “The most critical task facing humanity today is the creation of a shared vision of a sustainable and desirable society, one that can provide permanent prosperity within the biophysical constraints of the real world in a way that is fair and equitable to all of humanity, to other species, and to future generations.”

To engage these conversations, we need a different kind of leadership.  From Shellenberger and Nordaus: “The world’s most effective leaders are not issue-identified but rather vision and value-identified. These leaders distinguish themselves by inspiring hope against fear, love against injustice, and power against powerlessness.”

We have this capacity within us.  The civic energy and power that changed society in the 1960s exist today.  Focusing these energies in a new conversation, using democratic processes to engage us in positive ways, we can harness our power as citizens and make great things happen.