December 24, 2018, will be the 50th anniversary of one of the greatest, yet most neglected, gifts humanity has ever received.  It was witnessed directly by three American men, Frank Borman, Jim Lovell, and Bill Anders, and a photograph of that event was shared with all of humanity a few days later.  At the time, the photograph had a powerful impact and it remains one of the most important and impactful ever taken.

Even so, that image and the lessons it teaches has for the most part become an iconic artifact, eliciting at best a “cool” or a “wow” before thought drifts on to something else. 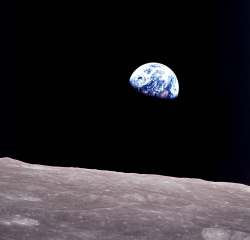 That gift was the image of Earthrise over the Moon.

It was seen with human eyes for the first time as Apollo 8 astronauts Borman, Lovell, and Anders completed their third orbit of the Moon during humankind’s first journey there.

The crew was busy fulfilling its responsibilities for photographing and mapping the surface of the moon.  All three were highly trained, disciplined, rigorous engineers.  Two were test pilots and one a fighter pilot, all laser-focused on the mission.  Yet all that was momentarily forgotten when Anders, the first to see it, blurted out “Oh, my God!”

The view was life-changing.  The impact on them individually is described in Rocket Men, by Robert Kurson, a marvelous account of the Apollo 8 mission.

Earthrise was the most beautiful sight Borman has ever seen, the only color visible in all the cosmos.  The planet just hung there, a jewel on black velvet, and it struck him that everything he loved…was on that tiny sphere, a brilliant blue and white interruption in a never-ending darkness, the only place he or anyone else had to call home.

Lovell was overwhelmed by the smallness of Earth, home to three and a half billion people (50 years later, 7.7 billion – ed.) who, from this vantage point, all wanted the same things – a family to love, food to eat, a roof over their heads, children to kiss.  From this distance he could scarcely comprehend the fragility of Earth’s atmosphere, a layer no thicker than the skin of an apple, the only thing that protected those lives and life itself.

To Anders, Earth appeared as a Christmas tree ornament, hung radiant blue and swirling white in an endless black night. From here, it was no longer possible to pick out countries or even continents; all a person could see was Earth, and it occurred to Anders…that once you couldn’t see boundaries, you started to see something different.  You saw how small the planet is, how close all of us are to one another, how the only thing any of us really has, in an otherwise empty universe, is each other.  As Apollo 8 came around the limb of the Moon and readied to reconnect (via radio contact – ed.) with home, it seemed to Anders, so strange – the astronauts had come all this way to discover the Moon, and yet here they had discovered the Earth.

The gift of that view is many things, a gift of beauty, of awe, of inspiration.  I feel all those things every time I contemplate this image.  To me, the most important aspect of this gift is one of perspective, a huge dope slap to the head of humanity to wake up before it is too late. Fifty years later, with more than double the human population of 1968 on our way to 9.5 or 10 billion in the next thirty years, we have yet to appreciate and heed the lessons this photograph teaches.

If we really understood our precarious, lonely, desperately fortunate place in the universe and our utter interdependence with each other and all life on Earth would we risk our very existence by conducting wars over religion, land, resources, political power? Would we spend trillions on weapons, accept zero-sum mindsets with everyone out for themselves, tolerate injustice, inequality, prejudice?  Would we continue shredding the ecological life support systems of the planet for short term, narrowly distributed economic gain? Would we accept the vast and growing gap between those with superabundance and those with essentially nothing, and conflate consumerism and economic “growth” with the achievement of human wellbeing?

We think we can play around with a Game of Thrones approach to life on Earth, conducting our dramas in heightened conflict with one another, proving who is “right” or “best” about this or that while damaging each other and ever more of the planet and get away with it.

As a species, while there are many noble individuals and organizations working for the common good, on balance we are blowing it.  The evidence is all too apparent and confronts us daily.  We have destroyed so much of life on Earth, but we haven’t completely blown it.  Not yet.

At this time of year, near the winter solstice, cultures and religions around the world reflect on the meaning of life and the deep regard we hold for kindness, compassion, and generosity toward all.  What if this year we take these declarations to heart individually and collectively, live them daily, and make these core human values the basis for decision-making?  What if we hold each other and our leaders accountable to this standard of human behavior, the standard we all intuitively know is the only one that makes sense and is survivable on a small, limited, fragile planet?

What if, fifty years later, we learn the lessons of Earthrise, the lessons that twenty-four Apollo astronauts who travelled to the Moon on nine Apollo flights learned?

We all do not have to make the journey to the Moon to receive the insight and understanding revealed in that image and many subsequent videos and photographs.  A few moments in quiet contemplation, reading about the experiences of Anders, Lovell, and Borman and living vicariously as an Apollo astronaut, imagining myself on board Apollo 8 observing that image in wonder and humility as it came into view, was enough to move me deeply.

As a species we are capable of such extraordinary things.  Forget the technological aspects of the astounding accomplishment of travelling to the Moon, I’m thinking about the human characteristics of courage, self-sacrifice, dedication, and commitment to a worthy effort shared by thousands of people working together and what we can accomplish.  I’m thinking about countless unseen acts of common humanity that happen every day all over the planet among families, friends, and strangers.  I’m thinking about our unlimited capacity for such acts, our talent for artistic brilliance and creativity, our sensitivity to the beauty of nature, our ability to experience joy, wonder, and love.

We have within us, as individuals and as a species, all we need to cultivate a world worth living in, a world nurtured into being by the best within us, a world like that described by Senator Gaylord Nelson, founder of Earth Day: “The objective is an environment of decency, quality, and mutual respect for all other human beings and all other living creatures.”

Perhaps on Christmas Eve this year, when there will undoubtedly be international recognition of the 50th anniversary of Apollo 8 and Earthrise, we can all take an extended moment to reflect, to absorb more deeply the gift of Earthrise and its lesson that, as Apollo 14 astronaut Alan Shepard realized when he took a long, hard look at the Earth from the Moon’s surface, “it is, in fact, very finite, very fragile…so incredibly fragile.”  Nothing less than our survival depends on it.