“There is a world of difference between well-being and being well-off.” Stefan Klein, The Science of Happiness 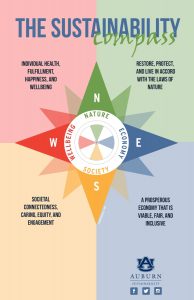 Imagine an economy and a future where Wellbeing, the western point on the Sustainability Compass, one of the four system conditions of a sustainable world, is the point and the goal; and a time when humanity is well on our way to achieving that goal.

To get there, we have to change the economic goal we now pursue, which is maximizing economic growth as measured by national output, or gross domestic product (GDP). Growth is the Holy Grail that most politicians and economists across the political spectrum strive to achieve.

However, what is the point of economic growth for growth’s sake? GDP is not an accurate measure of how well people in a society are doing, it is merely a measure of economic activity. Economist Simon Kuznets invented the concept of GDP (originally Gross National Product, or GNP) in the 1930s, and he makes this point himself: “The welfare of a nation can scarcely be inferred from a measure of national income.”

Furthermore, Kuznets observed: “Distinctions must be kept in mind between quantity and quality of growth, between its costs and return, and between the short and the long term…Objectives should be explicit; goals for ‘more’ growth should specify more growth of what and for what.” Exactly.

There is one other unavoidable fact to consider: It is impossible to have perpetual economic growth on a finite planet. We are already in deficit on the use of the planet ledger and have been since 1970. Globally we are consuming 1.7 times the resources the Earth can provide in a year and at the same time overwhelming Earth’s capacity to process the wastes humanity generates. Growth has to stop at some point. Systems thinking expert Donella Meadows warns us: “There will always be limits to growth. They can be self-imposed. If they aren’t they will be system-imposed.”

We are seeing the truth of her words today. Under the banner of economic growth and consumption, we have pushed past the limits of Earth’s living systems and are now dealing with the consequences. Climate change is one frightening example. It is caused by the ongoing burning of massive amounts of fossil fuels.

We have triggered significant changes to the planetary climate system, which is why the planet is warming, resulting in climate change.

A consumer-driven economy that conflates the acquisition of material goods with happiness, success, and wellbeing is a major culprit in degrading the health of the planet. Sticking with a goal of economic growth means we will continue to consume more and more, degrading the planet more and more. It’s a rat race to oblivion. Many studies have made this point. Here’s a sampling: · “Household consumption is a major contributor to anthropogenic climate change.” From Climate Change and Society: Sociological Perspectives, Ehrhardt-Martinez et al (2015) · “Household consumption significant driver of climate, other environmental impacts.” “A [2016] study published in the Journal of Industrial Ecology at the Yale School of Forestry & Environmental Studies shows that the stuff we consume — from food to knick-knacks — is responsible for up to 60 percent of global greenhouse gas emissions and between 50 and 80 percent of total land, material, and water use.”

And if consumerism is a proxy for wellbeing it is failing on that account too. Buying a lot of stuff does not make us happy or generate wellbeing. In The Science of Happiness: How Our Brains Make Us Happy – and What We Can Do to Get Happier, Stefan Klein tells us what does: “A civic sense, social equality, and control over our own lives constitute the magic triangle of well-being in society.” 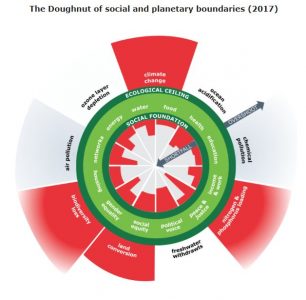 So what should the economy look like? One that achieves Klein’s magic triangle? One that respects the laws and limits of Earth’s living systems? Answers can be found in Oxford economist Kate Raworth’s important, paradigm-shifting book, Doughnut Economics: 7 Ways to Think Like a 21st Century Economist.

Raworth declares that “a far bigger goal (than growth) is needed: meeting the human rights of every person within the life-giving means of our planet.” Now that is a goal worth designing an economic system to achieve.

In her book, Raworth shows us what this goal looks like and how to achieve it. It looks like the doughnut pictured here.  This image also shows areas where we have not yet succeeded. The red areas in the social foundation boundary indicate that we have yet to achieve the minimum conditions for all in any of the twelve elements of the social foundation.  The red areas in the ecological ceiling indicate areas where we are violating planetary boundaries.  We have much work to do to create the safe and just place we all deserve.

“Meeting the human rights of every person” means creating a Social Foundation that forms the inner boundary of the doughnut consisting of the twelve elements depicted:

“Within the life-giving means of our planet” means staying within the ecological boundaries of the living Earth, respecting the Ecological Ceiling that forms the outer boundary of the doughnut. That means respecting limits on:

Providing a social foundation and respecting the Earth’s ecological limits enables us to, in Raworth’s words, “bring all of humanity inside the Doughnut’s safe and just place.”

I implore you to read Doughnut Economics (easily readable and very enlightening), and that we join together to think and act like 21st-century economists to achieve the goal of human wellbeing.

If we can envision it, we can create it.