“We’ve all but forgotten that public participation is the very soul of democratic citizenship, and that it can profoundly enrich our lives.”  Paul Rogat Loeb, Soul of a Citizen

The future of our nation and the planet we inhabit depends on our willingness to more fully exercise our rights and responsibilities as citizens in the public processes of governance.  We have rights that empower us to participate.  We also have responsibilities to be informed and to engage in public life together if we want to see our democracy survive and thrive.

The way we choose to engage makes all the difference.  A functioning democracy means citizens coming together in ways that allow us to express our differences, while maintaining a shared bond of citizenship in community.  As Parker Palmer puts it, “It is in the common good to hold our political differences and the conflicts they create in a way that does not unravel the civic community on which democracy depends.” 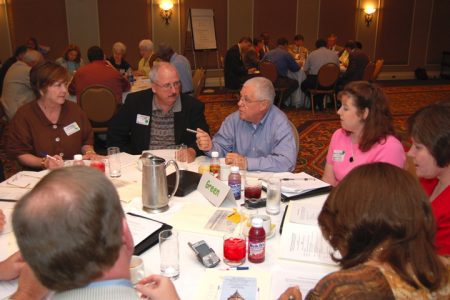 Citizens work together via a roundtable discussion to help set goals for their community.

Democracy depends on “civic community.”  We are all in this together.  That’s one of the principles of democracy, and it’s also a principle of sustainability.  No one exists in a vacuum, or on an island.  We are intimately interconnected and interdependent.  That is the nature of life itself.  And that is why caring for the whole, the common good, the commonwealth, is a central concept of democracy and why citizens understanding and nurturing the common good is so important.

Speaking of vacuums, Aristotle is credited with saying “Nature abhors a vacuum.”  What that means for democracy is that if citizens don’t occupy the space of governance by working together representing their different interests in the context of the common good, others will.  Narrow “special interests,” those with wealth and power, will dominate government, and public policy will reflect their interests instead of addressing the needs and interests of the people.

A 2014 study conducted by Martin Gilens at Princeton and Benjamin Page at Northwestern found that indeed the wealthy and powerful are dictating public policy to their benefit.  The researchers analyzed almost 1,800 U.S. policies created by government between 1981 and 2002 and compared them to what average Americans, wealthy Americans, and special interest groups wanted.  Here is what they found: “Multivariate analysis indicates that economic elites and organized groups representing business interests have substantial independent impacts on U.S. government policy, while average citizens and mass-based interest groups have little or no independent influence.” In other words, those with wealth and power get their way, and average citizens have essentially no influence.

Even more disturbing is their conclusion: “Americans do enjoy many features central to democratic governance, such as regular elections, freedom of speech and association and a widespread (if still contested) franchise. But we believe that if policymaking is dominated by powerful business organizations and a small number of affluent Americans, then America’s claims to being a democratic society are seriously threatened.”

This is very scary to me, and sounds a troubling lot like an oligarchy, defined as “a small group of people having control of a country, organization, or institution.”  Let’s be clear: an oligarchy is not a democracy.

What’s the solution?  An informed and engaged citizenry, acting together to ensure public policy is focused on the public interest.  To achieve that, we need to cultivate the skills of citizenship.  In his book Everyday Politics, Harry Boyte says that means “…learning the skills of negotiation among diverse interest, among citizens of relatively equal standing, across partisan and other divisions, to accomplish tasks or to solve problems.”

We have to be intentional about it.  We have to make the effort to appreciate, learn, and practice the skills and responsibilities of citizens in a democracy.

The challenge is that our politics have become so toxic, so negative, that as Boyte says we have to “reverse the negative directions of our society and to renew democracy.”  We can change the conversation and the context for the conversation.   Boyte writes about “creative civic experiments” that in part describe what he means by “everyday politics,” the title of his book.  The creative civic experiments he writes about “…have generated an everyday politics of negotiation and collaboration that is more concerned with solving problems and creating public goods than with placing blame.” 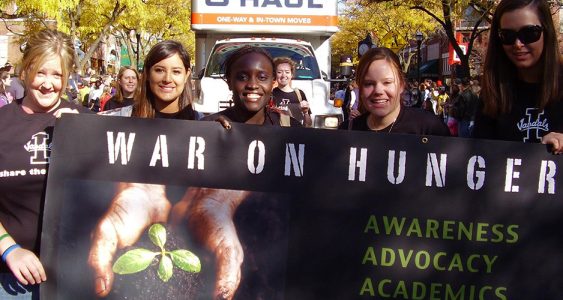 Students march to raise awareness and spur action on issues related to hunger.

It is essential that we do this.  It is how democracy is designed to work.  I have great faith in the ability and power of citizens to work together, through the give and take of debate, advocacy, argument, open listening, and collaboration, to transform our politics and our society.  I am convinced, and have witnessed in my own experience, that we have within us the talent and ability to acquire and use these skills successfully.

It gives me hope to know that creative civic experiments exercising the power of organized people are popping up all over.  Faculty and students at Auburn University are facilitating such experiments right here in Alabama.  Impactful civic experiments are happening in places around the country and the world.

That’s Harry Boyte’s conclusion too:  “We stand at the beginning of a world in which free citizens, across boundaries and borders, learn to act together in consciously political ways to create the future.”