Director’s Corner: Business Must Play a Key Role in Creating a Sustainable Future

“In a world of constrained natural capital, social capital, and human capital, optimizing only return on financial capital imprisons business in the shadow of a distant past.” Arie de Gues, Former executive at Royal Dutch Shell

“We’ve reached a tipping point. Our planet and our society are at risk.  Business has a historic opportunity and a responsibility to lead the world down a more just, rich, and sustainable path – one that creates more value for companies, communities, and countries.” Paul Polman, CEO, Unilever

One of the most important and promising trends in the sustainability movement is what is happening at the leading edge of business and industry, as more and more companies embrace sustainability and recognize its importance to their future.  Consider:

According to a survey of over 3000 global CEOs cited in the Winter 2013 edition of the MIT Sloan Management Review,

The number of books, articles, research papers, organizations, websites, and initiatives related to sustainability in business is exploding and has been for the past several years.  I’ve been following this trend for a while now, and there is no way I can keep up with it.

There are a few central messages and common themes I have gleaned from the literature:

I first read about these themes in the mid-‘90s, in the highly original and influential book The Ecology of Commerce, by Paul Hawken, first published in 1993.  A revised edition was published in 2010. 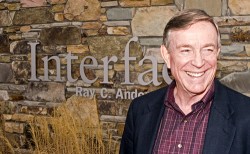 Ray Anderson, founder and former CEO of Interface, read this book in 1994.  He wrote that The Ecology of Commerce changed his life and the direction of his company.  You can read the story for yourself starting on page 10 of Ray’s wonderful book, Business Lessons of a Radical Industrialist.  He found in Hawken’s book “an indictment” of the way he was doing business at Interface, an indictment of the way business and industry was destroying the Earth.

The importance of this stark truth-telling – even at the risk of offending some – cannot be overstated.

One of the first steps in moving forward from where we are requires an honest assessment of our current situation and the courage to acknowledge the truth of our predicament.

This is exactly what great businesses do, what great organizations of any type do, what great societies do.  Jim Collins learned this while conducting research that turned into his terrific business book From Good to Great.  Great companies have the courage “to confront the most brutal facts of current reality,” while still remaining hopeful and confident that a solution will be found.

So when Hawken and others point out that business and industry have been largely responsible for life-threatening degradation of the Earth’s living systems, acknowledging and understanding this is a very positive first step in creating a different future.  Here is how Hawken describes the problem in The Ecology of Commerce:

“[W]e have a design problem, a flaw that runs through all business.”  The result of this flaw, he goes on to say, is that “The land, water, air, and sea have been functionally transformed from life-supporting systems into repositories for waste.  There is no polite way to say that business is destroying the world.”

Part of the problem is a linear, take-make-waste industrial system, the way business

What Hawken calls “the single most damaging aspect of the present economic system” is that the price set by the marketplace does not include the mounting damage caused to the Earth, societies, and future generations.  The market is dishonest and distorted by not incorporating all the costs associated with doing business. The result, Hawken explains, is that what appears as private profit is actually causing societal debt.  By not seeing the whole picture, the present industrial system persists even though it has outstripped its usefulness and “prevents a restorative economy from emerging.”

Then, as Ray described, the message of Hawken’s book shifts.

As Ray continued to read he says “I found something I wasn’t expecting.  According to Hawken, not only was business and industry the principle instrument of global destruction, it was also the only institution large enough, wealthy enough, and pervasive and powerful enough to lead humankind out of the mess we were making.”

For example, when it comes to creating products, we can eliminate the linear “take-make-waste” approach of the current system. Hawken cites three fundamental principles of nature that provide a model for business:

Another high leverage positive change is the evolution of how we view the role of business in society.  The old view espoused by Milton Friedman is that “Business exists to make a profit.” This worldview emphasizes short-term profit-taking and considers only a very narrow segment of societal interests at the expense of others. This is increasingly being recognized as a dangerous and fundamentally flawed paradigm.  The emerging view is articulated by Ray Anderson: “Business makes a profit to exist, and must surely exist for some higher purpose.”

One business leader who shares Ray’s view and recently went on record about his company’s “higher purpose” is Auburn’s own Tim Cook, CEO of Apple.  At a shareholder meeting in 2014 Mr. Cook was challenged by a shareholder group to assure that Apple would only pursue sustainability efforts if they could be justified by profit, or return on investment.  Part of Mr. Cook’s response: “When we work on making our devices accessible by the blind, I don’t consider the bloody ROI.” “[Apple does] a lot of things for reasons besides profit motive. We want to leave the world better than we found it.”

In the excellent book by Muff, Dyllick, et al, Management Education for the World, the authors explore the role of business in society.  They quote founding management expert Peter Drucker: “None of our institutions exists by itself and as an end in itself.  Everyone is an organ of society and exists for the sake of society.  ‘Free enterprise’ cannot be justified as being good for business. It can be justified only as being good for society.”

The authors cite a 2011 article in the Harvard Business Review by Michael Porter and Mark Kramer about the concept of Creating Shared Value (CSV).  Porter and Kramer define CSV this way:

“The concept of shared value can be defined as policies and operating practices that enhance the competitiveness of a company while simultaneously advancing the economic and social conditions in the communities in which it operates. Shared value creation focuses on identifying and expanding the connections between societal and economic progress.”

In practice this means the following, as summarized by Muff, Dyllick, et al on p. 17:

A new design for manufacturing, an honest and complete accounting of costs, and a more enlightened understanding of the role of business in society, are some of the powerful ideas and practices being explored and embraced at the leading edge of business today.

Business and industry are figuring out what it all means and how to move from the current system to “a restorative economy.”  The distilled version of the Interface definition of sustainability is: Take nothing from the Earth that is not naturally and rapidly renewable, and do no harm to the Earth, to societies, or to future generations. 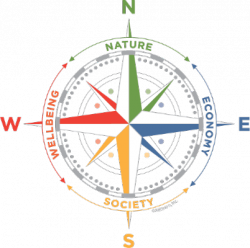 At this point, no business – or any other institution in society – is perfect.  Some businesses are making progress on some fronts of the sustainability challenge, while leaving others to be addressed.  Some companies, like Interface, have made a system-wide commitment to achieve sustainability across every point of the Sustainability Compass: Nature, the Economy, Societal conditions, and personal Wellbeing of employees and those who live in communities where Interface operates.

Auburn University and other institutions of higher learning have both the responsibility and opportunity to expedite and catalyze progress, to educate tomorrow’s business leaders and graduates in every discipline to think and see the world in a new way, to prepare them so they can contribute to an economy and business community that makes a fully restorative and inclusive contribution to society and the planet.

In Blessed Unrest, another book by Paul Hawken, he writes “Inspiration is not garnered from the litanies of what may befall us; it resides in humanity’s willingness to restore, redress, reform, rebuild, recover, reimagine, and reconsider.”

By embracing a willingness to reimagine the role of business in society and reform the way business operates, we can take a crucial and defining step toward a restored and flourishing world.

At the end of his book, Ray Anderson reflected on what Interface had accomplished to date and where it is headed:  “[I]f we can do it, anybody can.  If anybody can, everybody can.  This is the challenge.  This is humankind’s opportunity.  This is the better way. That way is sustainability: the survival option.”