Conflict in the World’s Most Important Wilderness Area: The Cameroon Anglophone Crisis & the Need for Community Participation in Conservation of the Congo

Home » Blog » Conflict in the World’s Most Important Wilderness Area: The Cameroon Anglophone Crisis & the Need for Community Participation in Conservation of the Congo

The Congo Basin Rainforest is the world’s second-largest rainforest at 500 million acres, it is larger than the U.S. state of Alaska. It has over 10,000 species of plants, and many charismatic species like my personal favorite, the world’s smallest elephant: the forest elephant. The forest elephant is small so that it can maneuver between the dense tangle of branches and vines.

One sunny afternoon, I was interviewing some forest-dwelling communities in the Cameroonian section of the rainforest near an area called Nguti. I was working with several skilled technicians and community outreach specialists from a local non-governmental organization (NGO), Ajemablebu Self Help (or AJESH), to train forest communities to draw the land that their people have held for thousands of years. We were making participatory maps of their forest tenure, or their historical right to live in the forest, and access its resources. These communities have lived for thousands of years in the rainforest, practicing small-scale agriculture and harvesting plants and animals from the forest sustainably. Now, industrial logging operations, manned by international companies who send cash home, were threatening their tenure. Participatory maps helped forest communities challenge industrial logging companies in court.

To make these maps, the men, women, and young people started on the ground, drawing important rivers with sticks and marking off religious sites with leaves and stones. Participatory mapping is done this way to make people who had never held a pen before feel confident. Once confidence grew, even the shy grandmas began to argue with the young men that things were not in the right place. Once everyone agreed on the drawing, we moved the ground map to large sheets of paper, and another AJESH colleague georeferences those maps and printed it out in large form for safekeeping in the forest community. This was the first map of their tenure they had ever received.

When I left this community in 2017, I felt that Congo communities were well on their way to securing land tenure, increasing room for participation in political processes by strengthening institutions for forest management. The winds of change had started to blow, and ministries across the Congo were slowly making more space for forest communities to have a say in stewardship.

These policy gains have shifted drastically, towards violence, civil unrest, and death in one of the world’s most important conflicts that nobody has heard of. The Anglophone population of Cameroon, after decades of feeling marginalized in access to basic opportunities, kicked off a protest movement in 2016-2017. The longtime Cameroonian ruler cracked down on these protests, shutting off the internet in the Anglophone region, and closing English speaking schools for over a year. Now, half a million people have been displaced and many activists have been jailed and even killed. 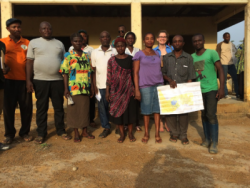 The Anglophone region in Cameroon has seen immense suffering and disruption to lives. The crisis has resulted in a massive step back in the political gains that local leaders and NGOs were making towards strengthening institutions to allow forest communities a bigger role in conservation. For example, AJESH and I were working closely with a tribal leader to promote community-based wildlife viewing in the area around the Mbayang Mbo Wildlife Sanctuary, work that has been stalled for years. Research shows that decades-long decline of Africa’s large mammals is tied to conflict.

In honor of our commemoration of Sustainable Development Goal 16: Peace, Justice, and Strong Institutions, I ask you to do some reading about the Anglophone Crisis that still unfolds today in Cameroon. Think of the tribal leaders, the NGOs, and the hard-working local government officials in the Anglophone communities, working hard to conserve the Congo rainforest. Many of them now live in temporary housing for internally displaced people. My friends in this region want nothing more than to get back to work, solving Cameroons conservation problems with community-based solutions. 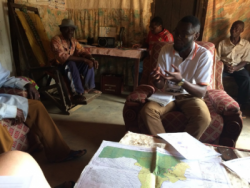 But, there is still hope. This hope can be found in what I see as the largest source of resilience and strong institutions in African conservation: a strong civil society made up of NGOs, and the dedicated people who work for them. I have worked with dozens of civil society specialists over the years, and they have single-handedly pushed for greater community involvement in forest conservation, indigenous rights, and technology transfer to these same marginalized groups. I have watched my colleagues in NGOs change the minds of ministers, skeptical of the usefulness of participatory maps. It is these same people who will pick up the broken pieces when the Anglophone Crisis ends, and we should support them, learn from their example, and offer whatever assistance we can as they rebuild their institutions when peace and justice ultimately prevail.