Dr. Ken Thomas has worked at Auburn University for almost eight years, all of which he’s spent with the Honors College. In his years here, Ken has been very involved in the classroom, previously working as a teaching fellow and a lecturer for honors level classes. In his current position as Associate Director for Student Affairs, Ken still teaches a few classes, but also handles administrative work with the many different student groups within the Honors College. A main task includes planning events throughout the year from club meetings to student breakfasts to banquets. 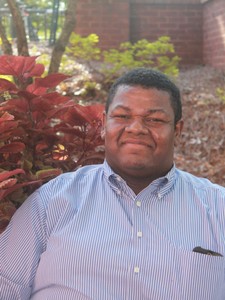 Growing up on the small island of Trinidad and Tobago, Ken was exposed to a degrading environment from a young age and saw firsthand the effects of trash on the landscape and community. From these experiences, Ken developed a care for environmental preservation, which he carried with him into his academic pursuits. During his undergraduate studies, Ken noticed a lack of discussion on sustainability, and instead, felt his program of study focused on quick output of products. It was during his graduate studies when sustainability became more prevalent to Ken, as he began taking classes in the field. In 2010, Ken graduated from the University of South Florida with a PhD in civil engineering with a focus on environmental and water resources.

Once at Auburn, Ken’s interest continued as he’s taught several honors classes related to sustainability and published many articles focused on the topic. When finding out about the Peers Network, Ken’s coworkers immediately thought of him as a great fit for the program, a nomination he took with enthusiasm. After all, he was already known around the office for trying to make changes, especially with the recycling in his unit.

So far, Ken has enjoyed getting to know the other Ambassadors, all of whom work in different areas of the university and were people he hadn’t worked with before. He’s been especially interested to hear their perspectives on various issues, challenges faced in their units, and stories of overcoming those challenges. Ken’s biggest takeaway from the Peers training sessions is learning strategies to talk to all kinds of people about sustainability in a way that is relatable and respectful. This insight has allowed him to expand people’s ideas of sustainability past the commonly thought of environmental aspect to include the economic, social, and personal wellbeing pillars, as well.

Being located in Cater Hall, Ken has seen positive efforts towards sustainability in the recent building renovations. Upgrades including a new HVAC system, double-paned windows, and smart lighting sensors have made the space more energy efficient. Ken is excited to encourage the unit to make more changes in the year to come. 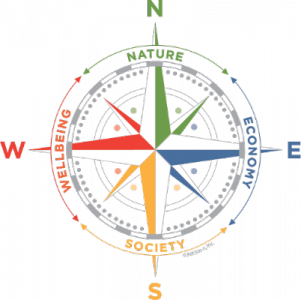 One area he plans to focus on is making the Honors College events more sustainable. With the large number of different events hosted, about 70 a year for current Honors students, any future changes would definitely make a difference. Ken hopes to focus on catering services to ensure all materials used are reusable or recyclable. Not only would this be beneficial for the environment, it would also expose students to new ways of doing things, teaching them in the process. While Ken does already buy in bulk to save packaging, there’s many other initiatives to consider, as outlined in the Green Event Guide.

Ken believes one of the greatest challenges to sustainability is it’s political entanglement, making it difficult to separate the base principles of sustainability from party affiliations. He sees people’s innate political beliefs as a roadblock in working toward positive change, with the effects seen differently depending on location within the country.

While this may be difficult, Ken also expresses his passion for overcoming the challenges through education. As an academic institution, Ken believes Auburn’s most inspiring sustainability success stories are those which students can see and learn from. While there are many areas on campus fitting this definition, Ken is most impressed with the work of Tiger Dining in their aspirations for more reusable and recyclable food containers and their efforts to help decrease waste. Ken believes this type of effort, which educates a wide audience and is visible especially to students, will be instrumental in moving toward a more sustainable future.

If interested, you can learn more about the Peers Network and meet the other Ambassadors.