Dr. Giovanna Summerfield has been at Auburn since summer 2002, working as a professor of French and Italian in the Department of Foreign Languages in the College of Liberal Arts. Beginning in September 2010, Giovanna started working in the Dean’s office, where she now serves as the Associate Dean for Educational Affairs in the College of Liberal Arts. 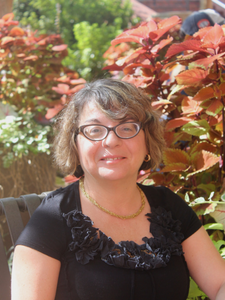 Dr. Summerfield grew up in Italy, where she first became familiar with the Slow Food Movement. In the ‘80s, the Slow Food Movement was created in response to the opening of the first McDonald’s in Rome. Food and its consumption is an important aspect of Italian culture. Meals are an event- from going to the market to collect ingredients, cooking the food, and enjoying it together. Fast food did not have a place in Italian culture, and many were passionate in ensuring that food culture did not change throughout Italy. Giovanna says her upbringing in Southern Italy familiarized her with more sustainable ways of life.

In 2010, Giovanna read a book called “No Impact Man” by Colin Beavan that inspired her to further her positive impact in sustainability efforts on Auburn’s campus. She invited him to be a guest speaker at the University, while also deciding to begin implementing “No Impact Week”.  As an annual challenge to ponder upon and practice ways of living that are sensitive to the needs of others, the wellbeing of our planet, and our own happiness, No Impact Week has now been an important part of the College of Liberal Arts. She feels that as a professional and representative of her college, she should share her interest and love of sustainable practices.

When the Office of Sustainability was first looking for Ambassadors to join the Peers Network, Giovanna saw the opportunity and decided she wanted to join. Since joining, she has enjoyed fellowship with like-minded people, as well as receiving information about the various resources that we share as being a part of the Auburn family. Peers Ambassador training covers a lot of different topics, but Giovanna says she has learned the most from the “StrengthsFinder”- an assessment used to reveal an individual’s biggest strengths and what they might best contribute when working as a part of a team. She saw the StrengthsFinder assessment as a way to think “out loud” about herself and her college, especially in its progress and needs in the area of sustainability.

Giovanna has been making strides towards sustainability since before she became a Peers Ambassador. The “No Impact Week” was a great way to see the impact that different changes can have. She believes you should always start small. She began by assessing the need for recycling bins that have sorted bins for different materials. Next, she put up stickers to serve as a reminder not to waste water or leave the lights on. The first time she felt resistance in her efforts was when she began to change supplies used in the community kitchen and for cleaning. But by starting slow and implementing small projects, Giovanna has become a leading changemaker on Auburn’s campus. 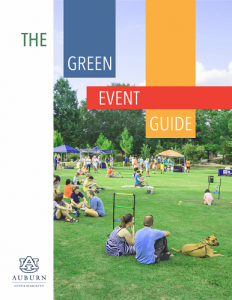 While Giovanna has already been successful in implementing change, she believes there is always room to improve. She is planning to implement more, little by little, in order to be more effective. Her focus has now shifted to the Green Event Guide , information provided by the Office of Sustainability to serve as a reference for those looking to implement more sustainability practices. Giovanna hopes to show that it is possible to make strides towards sustainability. She sees the Green Event Guide as a resource to help work with those that are not necessarily on board right away; and that by starting with a few small changes, while there may be a bit of resistance, the overall response will be positive.

Giovanna believes one of the greatest challenges to sustainability is the misconception that to be sustainable, you must have 100% implementation of sustainable practices and instantly have everyone on board. Other challenges she recognizes are the lack of resources and the perceived inconvenience of switching to more sustainable practices. Giovanna understands there are also challenges bigger than Auburn University. She mentioned the City of Auburn’s lack on consistent recycling pick-up. She hopes the city will implement more practices and gain consistency.

Giovanna is inspired by many of the initiatives across campus. She loves the bike share program (War Eagle Bike Share), the increase in recycling bins, and the water filling stations (Weagle Water) that are now widespread across campus. She recognizes these things as big changes from when she first got to Auburn. While many students come and go in 4 years, Giovanna has had the unique opportunity to watch the campus evolve since 2002. She has seen incredible progress over the past 16 years. In her own area, she is interested in interacting with the City Planning major, which only recently joined the College of Liberal Arts. While Giovanna is very familiar with food and the role it plays in creating a sustainable world, she hopes to learn more about other topics by connecting with other Ambassadors and different colleges across campus.